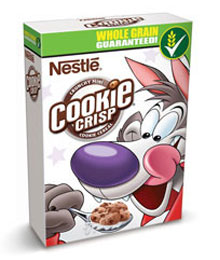 COOKIE CRISP: One of five best-selling Nestlé cereal brands to be manufactured at the new Cereal Partners Worldwide factory in Malaysia.

Cereal Partners Worldwide (CPW), a joint venture between Nestlé and General Mills, will invest CHF 35 million over two years in the construction of a new breakfast cereals factory in Malaysia.

The factory - due to begin production in 2012 - will make best-selling Nestlé breakfast cereal brands Koko Krunch, Honey Stars, Cookie Crisp, Koko Krunch Duo and Milo, for consumers in Malaysia, and for export to Singapore, Indonesia and Thailand.

Located in Chembong, Negeri Sembilan, the 6,500 metre square factory will enable the local production of Nestlé breakfast cereals for the first time in Malaysia, which are currently being imported.

He said: “In addition to spreading the production base throughout the region, Malaysia was selected based on the readily available quality local ingredients as well as for the country’s investment friendly environment and infrastructure.

“Having a factory in Negeri Sembilan also means that we are producing the breakfast cereals right here in Malaysia, which is one of the most important markets in the region. This will create hundreds of direct and indirect jobs, so benefiting Malaysian society.”

The new factory, which will source up to 80% of its raw materials from local suppliers, will be built based on policies for environmental sustainability adopted by both partners in the CPW venture, and in full compliance with environmental legislation.